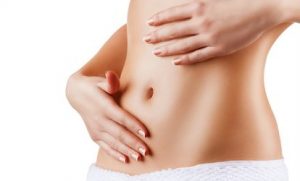 At Olympico Chiropractic Med Spa, we offer laser liposuction (or laser lipo, as it’s more commonly known) as an alternative to invasive liposuction. Our Laser Lipo™ treatment offers a way to achieve inch loss and body contouring by using laser lipolysis technology to break down fat cells without surgery, pain or downtime.

During treatment, low level laser beams are released through the treatment pads, creating a chemical signal in the fat cells that breaks down stored triglycerides into free fatty acids and glycerol, which are released through the cell membranes. Fat content is then transported around the body to tissues where it will be “burned off” during a period of post-treatment exercise.

Exercise creates a demand in our bodies for extra energy. Normally, the body responds to this demand by releasing stored fat content to be used as fuel. The release can be from any stored fat content around the body. Through the use of low level laser beams, Laser Lipo creates a process to mimic the body’s natural processes, and allows you to select a target area for fat release.

Our laser fat reduction treatments typically take approximately thirty minutes, and since everything we do is non-invasive, there’s no recovery time at all, so you can be back to work or play right away.

Traditional liposuction requires an invasive procedure to remove fat from areas such as the abdomen, thighs, neck, and arms. But there’s another way to slim down without surgery or even downtime. It’s called noninvasive laser lipo, and it
relies on laser energy instead of incisions to slim the body quickly and almost no effort on the part of the patient.

Note: Sometimes the term “laser lipo” is used to describe conventional surgical liposuction that incorporates lasers to enhance the results, but that’s not how we’re using it here. Unlike conventional liposuction, the idea of noninvasive laser lipo is not to remove fat cells, but to shrink them. During each session of Laser Lipo our technician places pads equipped with laser diodes directly onto the skin. The laser energy painlessly penetrates down to the fat cells and creates tiny
holes in their membranes. This causes the fat cells to release their stored fatty acids, glycerol, and water into the body and then shrink, resulting in lost inches. The body then flushes out the expelled fat-cell contents via the lymphatic system or burns them for energy.
Think of your fat cells as groups of juicy grapes . The laser beam reaches the fat
cell and shrinks the contents, and those grapes become raisins.

You’re gonna be very relaxed, We’re gonna put you in a nice little cocoon, which helps speed up that metabolic process.

From there, the technician applies the pads to the targeted area, inundating it with laser energy for about 10 to 20 minutes. If necessary they may then move the pads to focus on another area and repeat the treatment. And that’s about it. You may see a difference immediately, but for best results, you’ll need to return.
Here are some fast facts about the recommended cycle:

Though some clients begin to notice results after only a few sessions, most require 6–8 treatments to see maximum results.

Two treatments per week for four weeks are recommended.

Because the treatment is not invasive, no downtime is required.

There are many trade names for various laser body-contouring treatments, and discussing them can get confusing since those names are sometimes (incorrectly) used interchangeably. Our professional Laser Lipo Machine that we use here at Olympico Chiro Med Spa contains more than 30 laser diodes, and it’s applied directly to the skin in the form of pads. By contrast as being used by most other spas is a device that hovers just above the skin and uses just 5 diodes and you will not see the same results as you will see at our clinic, Some believe this difference makes our professional laser Lipo machine we use here at Olympico Chiropractic med Spa more comfortable and way more advanced and more effective.

WHAT AREAS THAT CAN BE TREATED WITH LASER LIPO?

All parts of the body that store fat can be treated.

The most common treatment areas include:

Because Laser Lipo does not destroy fat cells but rather empties them of their contents, the fat cells are capable of storing fat again. A balanced diet is the only way to ensure lasting results.

We want you to make some good dietary choices, Eat lean protein. Limit your alcoholic beverages and sugar. Those who take in more calories than they burn will see their improvement start to decrease over time.

Call today to enroll or learn more about online courses and clinical hands on training!

Font Resize
Contrast
Accessibility by WAH
Call Us Text Us